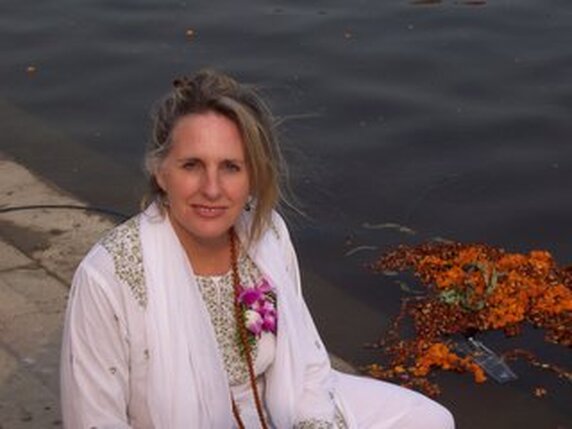 Ruth has been a life long student of meditation.  In 1968 when she found a Hindu Path and went to India to embrace it. There she was initiated into Surat Shabd Yoga.

Her work now is to help each person, through a meditation and dialog session to find the ongoing presence of peace inside their heart.  She helps each perosn to to discover, cultivate and sustain this awareness for themselves.  She has the gift to help people connect to their spiritual heart and to deepen meditation practice.

Since 2005 she has devoted her spiritual studies to the MahaVidyas, the Wisdom Mothers of India.  She has written 2 books and created a devotional movement ritual from this practice.

In 2020 Ruth wrote her second book, Going up the Mountain ~ A Journey with the Dasha Mahavi (10 Great Powers) .  This writing captures the journey of the soul, in an engaging and creative way.  It is presented as an elaborate fable of journeying up the mystical mountain within, through the realms of higher consciousness to pure spirit.  It follows the tradition of the great mythological stories found in India.
Education:

​As a child she realized that she was dancing to God. Her classical training includes 18 years of classical ballet, Russian Folk, African, Modern Dance and Jazz, performance and choreography. In 1970, she was initiated into Surat Shabd Yoga, a Bhakti, Jnana and Karma Yoga Path. She holds certificates in Hypnotherapy and NLP.  She has also studied Sacred Dance, Hatha Yoga, Tai Chi, Medical Chi Gung and energy healing.

​Through contemplation and the study of Tai Chi and Chi Gung Ruth learned how to reflect the nature elements. She became aware of how the ancients "studied" nature by uniting with it. From here one can learn to be as natural as the nature around us. The nature teaches us how to expand awareness and enter an egoless state of being. We can use outer movement to explore, align and ascend to our highest spiritual reality.

To Date:
Since 1993 she has been co-leading spiritual retreats with her husband Bruce Davis in America, Europe, Bali Indonesia and India.  In 2000 they founded a The Assisi Peace Center, a Temple to the world relgions in the heart of Assisi, Italy which received a Papal blessing in 2001.  At the same time they restored an old farmhouse in the Umbrian countryside which became the first Silent Stay.  In 2012 she and her husband returned to the United States, bringing Silent Stay Meditation and Retreat Center, a Hermitage Style Retreat, to the hills of northern California.  This facility burned down in 2020 in the wildfires along with 210 other homes nearby.  Ruth and Bruce moved to Montecito, California where they currently live and work.  They are building a new Silent Stay with hopes to reopen in 2022.